The Academy Volleyball Club of Indianapolis offers the largest number of boys teams in the Indianapolis area! During the 2020-21 Club season, 26 teams and 252 families called The Academy their home.

Our teams receive the highest training around from coaches who have had successful careers both on the court and the sideline. Our coaches have been State champions, all-conference athletes, and professional international players.

The Academy competes in events around the Midwest, including the Palos Point Series and a wide variety of National Qualifiers. The Academy Volleyball Club is one of the founding clubs of the growing Midwest Boys Point Series, which brought close to 100 boys teams to the Indianapolis area in December 2019, making it the largest non-qualifier event for boys in Indianapolis.

Our teams range from National level, where they play some of the best competition in the country, all the way to introductory Non-Travel teams, where the focus is development and appreciation for the sport of volleyball.

The Academy Volleyball Club is also the only boys program in the state to offer a full-time recruiting coordinator specific to boys. Our recruiting services are made to help connect athletes to any program in the country! 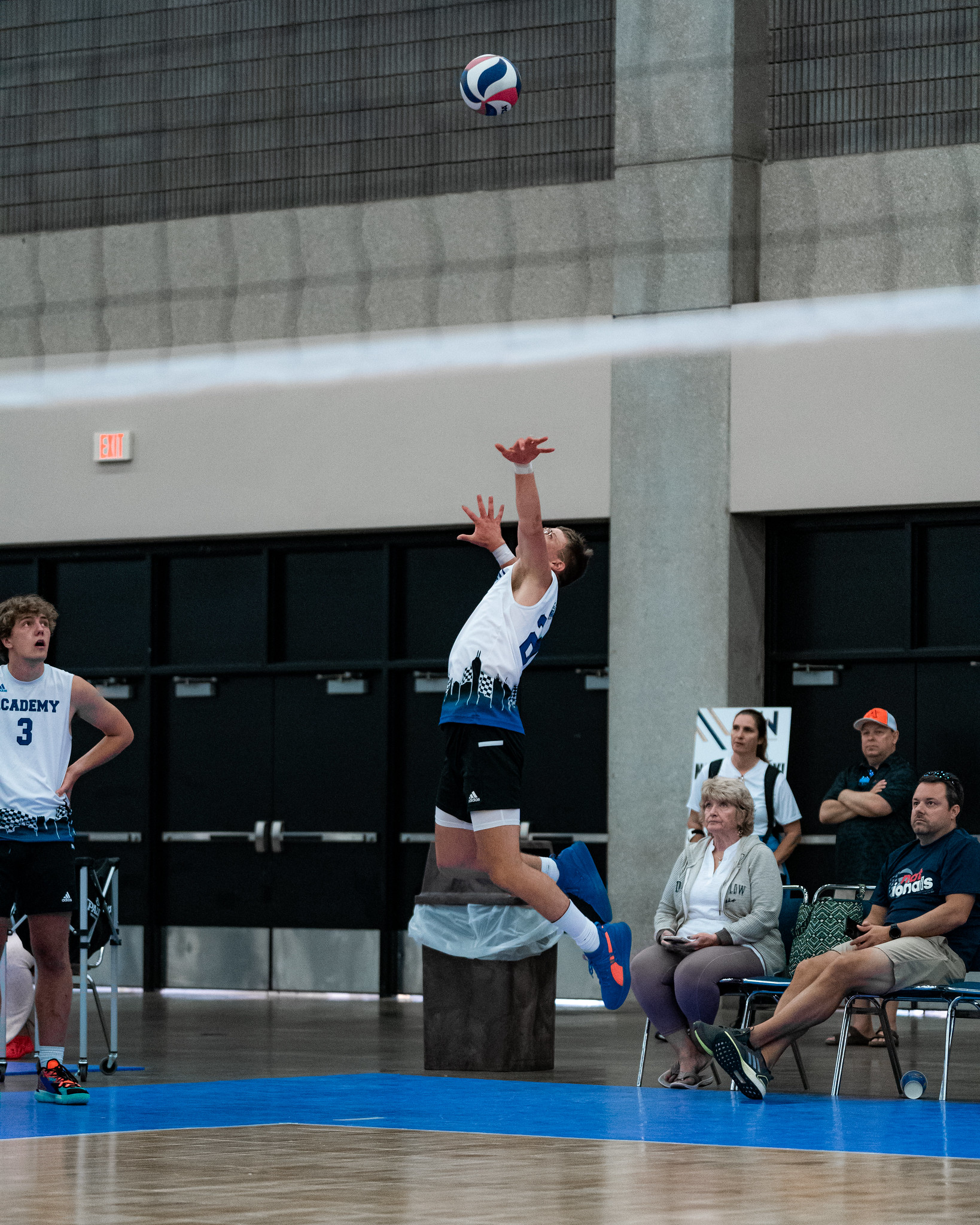 A new revamped and tournament schedule for all teams which allows more diversity of competition and collegiate exposure. The Academy will also only offer THREE levels of teams..

Our Elite teams will be expected to see a higher travel responsibility and be exposed to some of the best competition in the country. This will include National Qualifiers, invitational only events, and the 2023 AAU National Championships in Orlando Florida (13-18U Adidas teams, 14U-17U Blue teams) Pending schedule conflicts with AAU and USAV Nationals we will give teams the OPTION to participate in both national tournaments (USAV Nationals in Salt Lake City)

Want the same experience our top teams get but do not want the travel responsibility? Our regional teams will get great local competition as well as a few travel events. Teams will have the OPTION to add individual events including qualifiers or nationals!

This redesigned version of our popular Non-Travel program will allow more consistency with schedules and a longer time frame. This program runs from November to the middle of January and will compete against other local clubs and the two hosted Midwest Boys Point Series events!

We are excited to announce our administrative staff for our boys programming at The Academy! These staffers have more than 25 seasons of boys coaching experience combined and can help answer any questions you have regarding boys club teams at The Academy. Please don't hesitate to reach out to one of our staffers, and use the menu below to find more information online.

Andrew Fuller has been at The Academy since it opened in 2014, and he is in his seventh season as club head coach. In 2019, he was named the Director of The Academy Boys Program.

Andrew is the Boys Varsity Head Coach at Guerin Catholic (Noblesville, Ind.) High School, having founded their boys program in Winter 2016. With Guerin Catholic, Andrew has brought three winning seasons and four sweet sixteen finishes,  as well as a regional championship in 2021 in just four seasons.

In 2021 Andrew was the Head Coach for the 16 Adidas program where he led them to a top ten national ranking throughout the entirety of the season (per Advanced Event Systems or AES) as well as leading them to six championship matches,  eight gold bracket appearances/top five finishes, and three tournament championships as well as a 2021 Open Bid to the USAV Boys Junior National Championships in Kansas City, MO.

Andrew was named the Girls Varsity Head Coach for Shelbyville (Ind.) High School in 2018 where he led the Golden Bears to their first .500 season in five seasons in his inaugural year. The Golden Bears were 6-17 in 2017. He concluded four seasons with Shelbyville exceeding 60 wins.

Andrew began playing volleyball at age 11, eventually becoming a standout libero at Carmel (Ind.) High School, where he played on teams that won back-to-back state titles and were ranked in the top 25 nationally (2011, 2012). He was also a member of club teams that finished third at Asics Junior Nationals and fourth at USAV Junior Nationals.

Andrew was most recently named to the 2021 AVCA 30 Under 30 High School Coaches awards which ranks him amongst some of the best and prestigious high school coaches in the country under the age of 30.

Austin Hillman enters his third season The Academy after directing Indy Elite Boys VBC for four years. He has many years of experience coaching nationally and locally and youth and high school ages. Austin also serves as the Assistant Boys Director, Master Youth Coach and Youth Director for the Academy boys program.

Austin, alongside his assistant Andrea Pawlik, have led five USAV qualified teams in the U14 division: three different Indy Elite 14U boys teams to Open bids at USAV Nationals (2016, 2018, 2019), an Academy U14 team to a USA bid (2020) and most recently an Academy U14 teams to an Open Bid and a 10th place finish at USAV Nationals. Prior to starting Indy Elite, he coached two seasons at South Indy VBC.

Austin is currently the Boys Coordinator at Saints Francis and Clare, where he has captured five City Championships and five Runner-Up finishes in the Catholic Youth Organization. He has also served on the girls and boys staffs at his alma mater, Center Grove High School in Greenwood, Ind. He previously assisted Roncalli High School’s boys program, helping them to State Runner-Up finishes in 2015 and 2016.

Austin is a graduate of the Indiana University Kelly School of Business, with a concentration in marketing and supply chain management. He is the Vice President of Commercial Solutions for Offprem Technology, a Salesforce Implementation Firm. He live with his Fiancé, Mackenzie, daughter Remi, and two dogs, Finnigan and Oakley.

In his free time has enjoys skydiving, being a Scuba Diving Instructor, and rock climbing.

For years, Carlos Capo has been a driving force behind the development of boys volleyball in the Indianapolis area, and he will be back for his sixth season at The Academy.

Carlos is currently the Varsity Head Coach at Fishers (Ind.) High School. In 2014, he restarted the boys program at the school, and just five seasons later, the team captured the 2019 State Championship with an in-state record of 36-0. Carlos was named Indiana Coach of the Year in 2019, and Conference Coach of the Year in 2017 and 2019. Other team achievements include three consecutive Regional Championships (2017-19), a conference championship (2019), and Indy Metro Tournament Champions (2019).

In 2021, the Tigers of Fishers repeated as State Champions only dropping one match the entire year. They also kept their active regional, metro, and conference championship streak alive.

In 2010 and 2011, Carlos ran a boys league, and that league has grown into an official CYO program since the 2012 season. He was the original Boys Volleyball Coordinator and a coach at St. Pius Catholic School in Indianapolis and served in those capacities for six years. In 2015, Carlos received the CYO Monsignor Albert Busald Service Award in recognition to his volunteer contributions to CYO Boys Volleyball. In 2013, he led the 5th/6th A Team to an undefeated season and the school’s first City Championship. He also captured another City Championship in 2015 with St. Pius’ Cadet A team. Prior to developing boys volleyball in the area, he coached a St. Pius 7th/8th grade girls team for three years.

Additionally, Carlos helped with Irish Juniors during the 2011 and 2012 seasons.

Carlos was born and raised in Puerto Rico, where volleyball is a very popular sport. He started playing the sport in seventh grade and eventually played for the Purdue Men’s Club Volleyball Team, for which he was a two-year captain. He continues to play in indoor and outdoor competitive leagues and tournaments.

Carlos earned his bachelor’s from Purdue University in hospitality management before obtaining his MBA from The University of South Florida. When not involved with volleyball, he enjoys spending time with his wife and two sons, golfing and playing basketball.